Light and sound are two things that we cannot live without. It’s a rare occasion when the two are combined in an elegant, artistic, and interesting way without sacrificing sound, or space.

The team at Richard Clarkson Studio, based in New York, has been working for a few years to create unique furniture and sound systems for the home that line up with a fresh take on the modern sleek aesthetic. They have a variety of products that range from speakers to unique looking chairs and lighting priced starting right around $200. Their most recent project, however, caught our eye today as something that really could become a conversation piece. 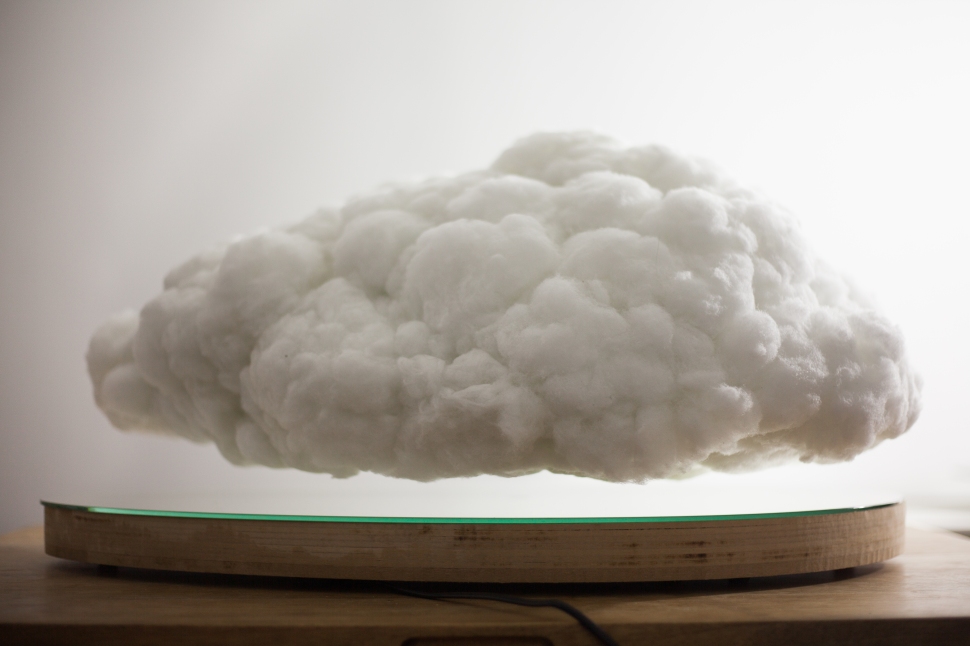 Meet Making Weather. The Richard Clarkson Studio started out creating wired floating clouds that also contained bluetooth speakers and could be hung from the ceiling a-la a lightly fixture. When music plays, LED lights inside the puffy cloud pulsate to the beat giving the affect of a lightning storm.

The company recently joined forces with Crealev, a company based in the Netherlands that  create levitating objects. The technology uses magnets to make things float and they join up with everyone from sneaker makers to design companies to create innovative displays.

The new levitating storm cloud, according to the press release, is a mid-size formation that floats above an reflective oval surface. The cloud floats 1-2 inches above the surface as a result of a set of powerful magnets in the base and in the cloud. The cloud can rotate 360 degrees and bob slightly as the magnets move. As the company notes, the base does need to remain plugged in, while the cloud is completely wireless. As music plays, the cloud lights up with tiny LED lights giving the impression of a micro-storm.

Check out the Vimeo segment below to see Making Weather in action.

While the product is merely a prototype at this point, both companies hope to take it to market soon (like the cloud that Clarkson currently sells for a mere $3360). Since the wired cloud is so pricey, we expect Making Weather will cost at least double if not triple the price of the wired version.

HT to DesignBoom for the lead on this cool story.

Get your very own Sous Vide at Home.

Cook on top of your aquarium? Sure you can.